The history of our company was cemented with short films being made that Edna from Archives had found for us to watch. These short films included interviews with Ellen, a cooking show we once did and some meme's that our company created to connect with a younger audience. These have been referred to as we have moved forward this week.

With 60 students, I was really worried about how we would build the office spaces and further develop belief in the world we are creating. Luckily, there was testing on for half the group in two blocks. So, for 45 minute blocks we could work with just 30 students on further building belief. This made this far more manageable and I'm not sure that this same approach would have worked with 60 students...

We started with creating our building spaces. We took the floor plans for the office spaces and standing in a circle we placed them on the ground, unpacking them and placing them where we though they would be. It was something that all students were really interested in and buying into. I then walked through the office spaces, describing what I could see / hear / smell, some the people I saw as I walked through the space. I then asked the students to go back in time and write about their first day at work.

This written task had them so engaged. They were writing about going out on the helicopter for a new find, about working in the labs, about mistakes they made on their first day, about the fishtank in the toilet. They were really excited to share about their first days. A couple of students did need reminding that they still worked at the company, and they quickly adjusted their stories to re-align.

Coming back to sit around the floor map of the office, they then spoke one line in vocal Mexican wave to create a picture of what work is like in the office. Some people spoke of feeling comfortable, feeling nervous and excited, more mentions of the helicopters. It was quite a nice moment where the energy of the room felt really positive.

We moved back into our final creation phase - posters, logos, website, 3D floot plans. These really show a raise in the status the company holds - formal business cards, language that reflects our values and our role in the company. 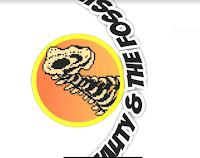 It didn't matter that the class were separated for this task, mostly because their written task was specific to their first day at work. I might create the office space with other groups in my classroom space, but I don't think that it is needed with this group. It was more about creating the feeling of the company as opposed to the objects around us.

We now move into our first 'mini-commission' that builds on the opening hook to deepen the learning around this task and further develop belief in the company and our role as experts. I'm feeling like the company is developing in a really positive way and this is the right time to introduce content learning into developing this further.

Popular posts from this blog

Where did the last two weeks go?

March 07, 2018
It has been two more weeks in class - four classes, so I am behind in my reflection posts. Last week, Mr Science set up a training crime scene. Using the skills they had learned through the fingerprinting professional development, two groups had to collect evidence from the crime scene. Before being allowed to enter past the caution tape, they needed to discuss and come up with plan, which each group did eagerly. There was a table of resources for them outside the crime scene. They discussed they needed their lab coats and name tags, they needed the shoe covers so they would not contaminate the scene. They needed to photograph where all the evidence was. They needed to document and log each piece of evidence. I was impressed with the level of seriousness with which most of the class approached the situation. They were focused and very aware of following some clear, agreed upon procedures. They collected their evidence and sent it away to the labs for testing. The next day, they
Post a comment
Read more

February 13, 2018
Term1, 2018 starts with a new Mantle of the Expert!  I am collaborating with a science teacher for this selected offered to Year 9 students called PROOF! This selected (option class) runs for one term with two sessions of 100x minutes per week. It is based around forensic science - something I know nothing about - and students will learn how to dust for fingerprints, analyse different fibers, analyse information and make conclusions about various crimes that are presented to them. The teacher I am working with experience MOTE last year when I was working on a connected class (check out my previous blogs for my reflections on that) and he is keen to try it again on a smaller scale and now that he has some understanding of the ways of working. In our first class, the students were met by the science teacher taking on a frozen effigy. He was sitting on a stool, with a box beside him (they could see a document with fingerprints on it), looking seriously at a piece of paper he was hold
Post a comment
Read more